Arkansas first began to adopt its own official state symbols in 1901. Many more have been adopted since then, and a state symbol can come in the form of state animals, mammals, a state bird and flower, butterfly, fruits, vegetables, amphibians, nicknames, trees, and much more.

State symbols were adopted by Arkansas to best represent them and their historical roots, past and present wildlife and nature, and the geological features of the state. Like all other states, there are many Arkansas state symbols that epitomize the state.

The Arkansas state insect is the honeybee (Apis). In 1973 Arkansas adopted an insect that would represent the state in more ways than one, that insect was the infamous honeybee. Honeybees are so instrumental in agriculture around the entire nation that they have been adopted as the official state symbol for seventeen states in total!

Honeybees produce pollen, which is a powdery substance discharged from the male part of the flower and is required in order for both humans and animals to survive. As you probably know, bees also produce honey, which is used in medicine and is also a natural sweetener. What you may not know is that it is also an anti-inflammatory, and antibacterial agent.

The famous honeybee can be found on the official state seal of Arkansas too, among other significant symbols of industry within the state.

What You Don’t Know About Honeybees

The smaller bees that you will see working away all day in the queen’s hive are called “house bees”, they will spend their days building the hive and maintaining the honeycomb. They have also been known to care for eggs and bee larvae as well as defend the hive and queen.

Larger and more mature bees are called “field workers” – they typically gather materials such as nectar and pollen from flowers and plant resins that are later used in the hive building process.

Over time, they have adapted an extra stomach, yes, you read that right! They also have special pollen baskets on their back legs, which are all used for transporting materials from outside into the hive. What is so incredible about bees is that they have been around for 40 million years, and the honeybee has remained unchanged for 30 million years!

Since honeybees hold such high significance in the state, it is nice to see that there are still massive honeybee communities all across Arkansas.

The honeybee is symbolic and unique to the state of Arkansas, making it a brilliant way of teaching about the state’s historical relationship with the insect.

For children, and adults with a passion for coloring and learning about various symbols, you will love our downloadable Arkansas state insect coloring page. Further down the page, you will find a multi-image coloring page for the famous honeybee if you want lots of smaller drawings you would like to color.

The image below is a smaller version of the downloadable coloring page link above, but feel free to also download this if you like. The downloadable coloring page does not just come in one size, we have created a multi-image coloring page that consists of four smaller images of the famous insect for your coloring pleasure.

The image below is a smaller version of the downloadable multi-image Arkansas state insect coloring page, feel free to download this too. 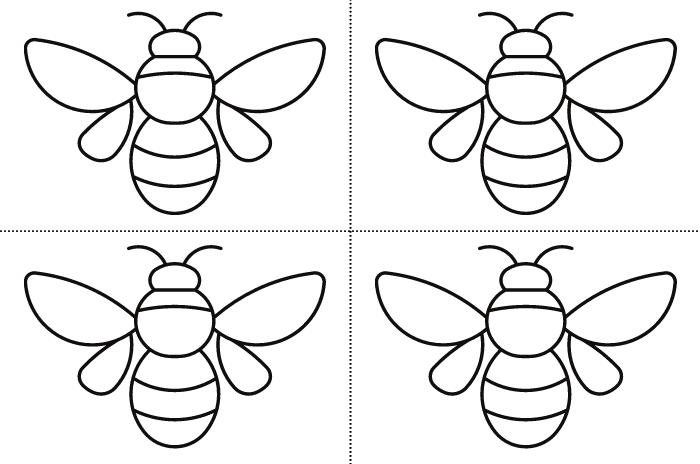 If you do not have a printer available to you, there are several places you can visit to print off these coloring pages; your local library, copy and print stores, shipping stores, postal offices, and even retail stores or your local pharmacy.

Most states will have their symbols showcase a relevant story, that is indicative of the state and its history, and the Natural State puts its history and what it stands for across very well in the Arkansas state insect.

This interesting fact about Arkansas and a whole host of others is what makes the state so unique and fascinating to those that live there, are planning to vacation there, or are researching the historical events of the state.