There is so much to dissect when considering the most interesting facts about Arkansas. The state has so much to offer, with the amazing and unique people who go by the names of Arkansans and Arkansawyers, the beautiful scenery and landscapes Arkansas has in abundance, and the deep history within the state.

The natural beauty this state possesses is showcased in the 7 Arkansas national parks, 52 state parks, the more notable being diamonds state park, and 3 national forests covering more than 2.9 million acres of the state’s land area. Arkansas is also home to over 200 camping sites and recreational areas, all highlighting the exquisite scenery within the state. 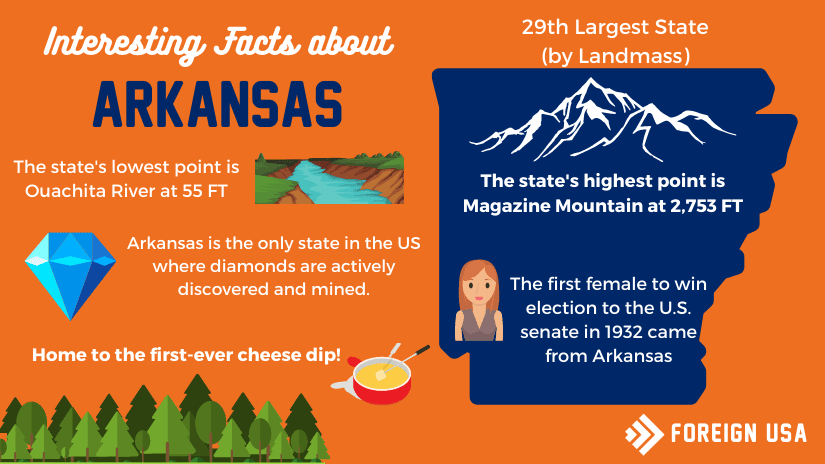 1. With a population of over 3 million, Arkansas is the 33rd most populous state, Arkansas also ranks 29th for landmass, boasting a land area of over 53,178 square miles and with a water area percentage of 2.15%, it’s a pretty dry state!

2. There are many amazing cities in Arkansas, but there are none more fascinating than Little Rock – even the name draws attention to it. Little Rock is not only the most populated city in Arkansas by more than double, but it is the state capital too, with a population of over 514,000 (metro area).

3. If you are a fan of good weather then Little Rock is for you! With approximately 217 days of sunshine per year enjoyed by Little Rock’s residents. Another thing that people find so appealing about Little Rock is the bright city lights, perfectly blended in with beautiful city parks, and iconic bridges. While all these attractions are extremely accessible, there is no feeling of overcrowding or claustrophobia which you may find in some of the other busy cities in the US.

4. White-tailed deers are found in abundance across the state, and the United States for that matter, which is one of the reasons why they became the official Arkansas state animal. They are glorious and majestic, but did you know that they can run up to 40 mph, jump over 9 feet in the air and swim up to 13 mph!

Arkansas has a good reputation and is considered by many as a popular place to live, visit, and do business. With so many things to do and places to see, you will never succumb to boredom, and with an ever-growing business climate and economy, it is becoming an attractive place to do business too.

Arkansas has a large number of booming industries, and the success of these industries has led to a stable and continually growing economy. Top Arkansas industries are agriculture, transport and logistics, aerospace & defense, and forestry & timber, to name just a few.

More Arkansas Facts You May Not Know

5. Arkansas is well-known for having very diverse geography, from huge mountain ranges to rich forests, and grassy lowlands. Arkansas has one of the highest cave populations in the US (almost 2,000), so, if you like exploring this is the state for you! 7. AR is the Arkansas state abbreviation.

8. The state’s lowest point is the Ouachita River, at 55 feet above sea level.

9. The state’s highest point is Magazine Mountain, which is 2,753 feet above sea level.

What is Arkansas famous for?

12. Arkansas is the only state in the US where diamonds are actively discovered and mined.

14. Pine trees hold much significance within the state of Arkansas, in fact, in 1901 they were adopted as the official state tree!

15. The three largest diamonds ever found in America were discovered in Arkansas.

16. The first-ever woman elected to the US Senate, Hattie Ophelia Caraway, née Wyatt, a Democrat from Arkansas.

17. Arkansas is home to the Dover Lights, which are an unexplained illumination over the valley of the Ozark Mountains. 18. During the early 1900s, the Hotsprings National Park was home to the United State’s largest Ostrich farm!

20. North of Little Rock is home to one of the nation’s largest municipal parks.

22. Arkansas’s state bird is the mockingbird and has been since it was adopted in 1929. Mockingbirds can sing over 200 different songs, which include animal noises, other bird sounds, and even machinery!

24. The maximum speed limit in Arkansas is 75 mph.

25. Before running through Arkansas and ending in Mississippi, the famous Arkansas River, which is a large tributary of the Mississippi River begins its journey at the Rocky Mountains in Colorado and runs for 1,460 miles (2,350 km). Economic facts about Arkansas originate from a multitude of business and economic-related considerations. The state’s business climate and economic strength have been growing at a steady, consistent rate.

There is no better time than now to register a business in Arkansas so you can take advantage of the state’s economy that is consistently growing. Here are some highlights of the economic state facts about Arkansas that make it one of the leading economies in the U.S.

People who decide to move to Arkansas do so because it isn’t just an affordable place to live and do business, with the house prices and cost of living being ranked in the top 10 for most affordable, but it is also home to arguably the most beautiful scenery in the whole country, offering endless stunning landscapes and incredible wildlife.

With all the opportunities this presents to existing businesses, those seeking to start a new company or franchise in Arkansas, or those of you who are simply looking for a job in Arkansas, the state’s economy has been growing well, and at a steady rate over the years.

Arkansas’ top industry is agriculture, which enhances the state’s rich landscapes ensuring much of it is covered in lush greenery and providing the perfect conditions for raising livestock and growing various foods. Agriculture contributes approximately $16 billion per year to the Arkansas economy according to the Arkansas Farm Bureau.

A snapshot of the state facts about Arkansas detailed above illustrates why many people choose Arkansas to either start a new business or franchise or relocate to the state for work or personal reasons. It is hard to argue why so many people move to the state each year from other states in the US and also foreign-born residents.

27. Before the civil war, the Arkansas territory was admitted to the union on June 15, 1836, becoming the 25th state to contribute to the formation of the 50 United States we know today.

28. When considering Arkansas history facts it is important to recognize the way in which Little Rock played an integral role in the American Civil Rights movement, during 1957, 9 African American students were denied entry to Little Rock Central Highschool, which caused a national uproar and a shift in the way African American’s were treated by society.

29. Arkansas is full of history and significant historical events that have made the state what it is today. As a token, and something used to never forget these moments, the natural state has adopted many state symbols that are used to represent the state in one way or another.

30. The Arkansas nickname, “The Natural State”, adopted in 1836 leaves little to the imagination when researching its origins, Arkansas is and always has been famous for being home to some of the most scenic views, crystal clear lakes and streams, and an abundance of amazing wildlife. This is supported by the amount of state and national parks residing in the state. Most states usually adopt more than one nickname over the years, Arkansas is no different, there are many nicknames associated with the state, to find out why Arkansas is often referred to as the Bear State, take a look at our Arkansas nickname page.