Arkansas first began to adopt its own official state symbols in 1901. Many more have been adopted since then, and a state symbol can come in the form of state animals, mammals, a state bird and flower, fruits, vegetables, amphibians, nicknames, state seals, and much more.

There are an incredible amount of Arkansas state symbols which creates an abundance of interesting facts, both from the past and present. We have shortlisted the most significant Arkansas state symbols below and further down the page you will find a comprehensive table displaying all the Arkansas symbols and the date they were officially enacted.

The mockingbird (Mimus polyglottos) was adopted as the Arkansas state bird in 1929. The famous mockingbird is also the state bird for four other states, Florida, Texas, Tennessee, and Mississippi. These birds are truly beautiful and can be found all across the United States, they are a silver/gray color and love to sing!

They are incredibly well-known for their singing abilities, singing up to 200 different songs, which usually include other bird songs, insect and amphibian noises, and even the noises of machinery! Today, there are over 45 million northern mockingbirds living in the wild. 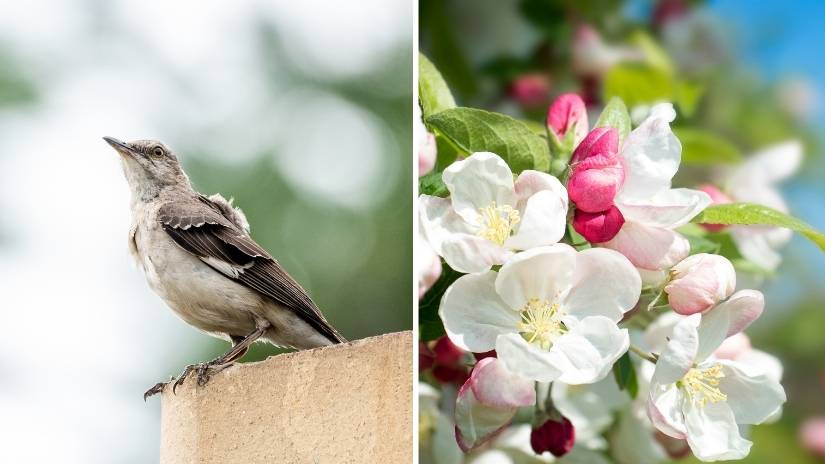 The stunning apple blossom has been the official state flower of Arkansas since 1901. Back in the early days, Arkansas was a major apple-producing state and still hosts its famous Arkansas apple festival on an annual basis in the town of Lincoln! The Arkansas state bird and flower are perfect representatives of the state, past, and present.

Unlike most other states, Arkansas does not have an official state animal, instead, the state has adopted a state mammal to represent the state instead. The incredibly beautiful and majestic white-tailed deer became the state mammal back in 1993. These awesome animals are known for their shyness, beauty, and immense power, being able to run up to 40 miles per hour, jump 10-foot fences, and swim at around 13 miles per hour! Their tails wave from side to side as they run, which flashes white as a warning when danger is approaching and also to confuse their predators. When they are born, they are born with white spots for camouflage. Historically, Native Americans and European settlers both heavily relied on these deer for their buckskin and their meat for food.

The famous Arkansas state seal was designed and created based on the territorial seal that was made by Samuel Calhoun Roane. The seal’s design was adjusted in 1836 when Arkansas officially became a U.S. state.

Honeybees are not only a popular insect in Arkansas, but there are a total of 17 states which use them as their official state insect! This is due to the significant role honeybees have played in agriculture and the nation’s ecosystem. It was during the year 1973 when the honeybee became the Arkansas state insect. The pine tree became the official Arkansas state tree back in 1939, paying homage to the state’s pine timber resources and reforestation efforts which have been taking place over the past several decades. Arkansas is home to four native pine species, shortleaf pine, loblolly pine, longleaf pine, and slash pines, with the most commonly found being loblolly and shortleaf pines.