Speed limits are certainly one of, if not the last thing to enter your mind when traveling to the beautiful state of New Hampshire. However, the state’s traffic authority sets out clear guidelines that must be adhered to in order to avoid receiving a traffic ticket, points on your license, subsequent insurance increases, and even jail time!

If you are moving to the Granite State, simply just visiting from another state or country, or even driving through the state or commuting through, having the right knowledge of the correct speed limits in New Hampshire is so crucial information to have and follow. 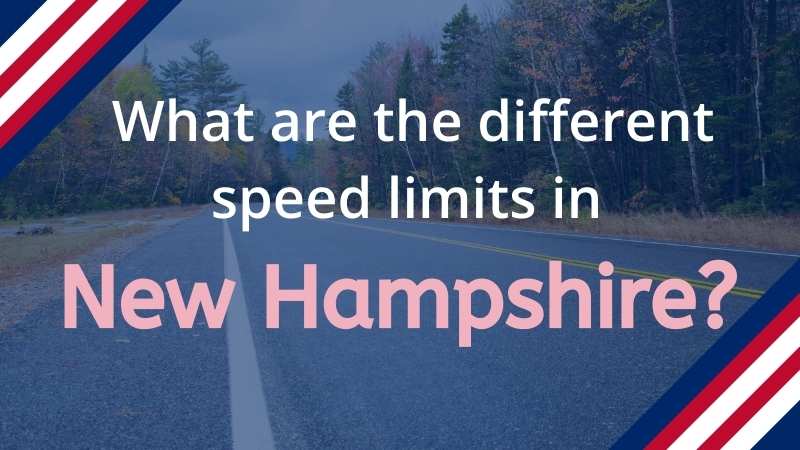 Knowing the correct speed limits is not only about avoiding potential punishment. It is also about driving safely on the roads to prevent accidents with another motorist or passersby from happening. Driving within the speed limit helps reduce the possibility of crashes, promotes efficient use of the road, and saves you from fines and potential license suspension.

For example, if you were driving down a 30 mph road in New Hampshire, on a dark and rainy winter night, where the road conditions are clearly not ideal for driving, you will be required to slow down your speed to significantly less than the signed limit of 30 mph. This is due to the weather and road conditions being considered dangerous, and if you were caught driving at the signed limit of 30 mph, you will likely receive a fine, and potentially even worse consequences.

As mentioned previously, as most states have “absolute speed limits”, which is a simple concept, what you see is what you get – if you drive faster than the signed speed limit, you will have violated the law. New Hampshire, however, opts for “presumed speed limits”.

If you exceed a presumed speed limit, or “per se” speed limit, you haven’t necessarily breached the law, and you may not be considered guilty. You will have the opportunity to prove in court that the speed you were driving was safe, and if you are able to, the judge will find you not guilty.

This incredibly unique speeding law would mean that if a police officer clocked you at a speed under the presumed limit, there is a presumption that you have not violated New Hampshire’s basic speeding law. So, unless posted otherwise, here are the New Hampshire presumed speed limits:

Violating New Hampshire’s basic speeding law will cost you a fine of $62 for the first offense, and $124 for the second offense. If you as the driver cannot prove that the speed was safe when driving under the presumed speed limit, the following penalties will apply:

Exceeding a presumed limit that is 55 mph or less:

When visiting, passing through, or relocating your family to the state of New Hampshire, it is understandable to have your mind focused on fun things to do. Although, knowing what is the speed limit in New Hampshire is – and adhering to the signed limits – will ensure your time is well spent and minimize the chance of you being fined or getting into an accident.

How to Get an EIN Number in New Hampshire

What is the Minimum Wage for Servers in New Hampshire?

How to Register a Business in New Hampshire

How Many Small Businesses are there in New Hampshire?

What is the New Hampshire State Seal?