The minimum wage in New Hampshire in January 2023 remains the exact same as it was last year and in previous years too – $7.25 per hour for state employees, with some exemptions to the rule that are mentioned further down this guide.

For business owners in New Hampshire, it is important to familiarize yourself with the correct and legal wage to pay your employees. Likewise, if you are an employee, you should know your workers’ rights and make sure you are being paid according to New Hampshire state law.

There are 21 states that currently align their min wage with the federal minimum wage rather than increase it to create their own unique state min wage. Unlike the majority of other states, it seems like New Hampshire is not looking to increase its minimum wage any time soon.

Did the New Hampshire Minimum Wage Go Up?

The graphic below highlights the New Hampshire minimum wage over the past several years. The minimum wage did not go up and remains at $7.25 per hour in 2023. 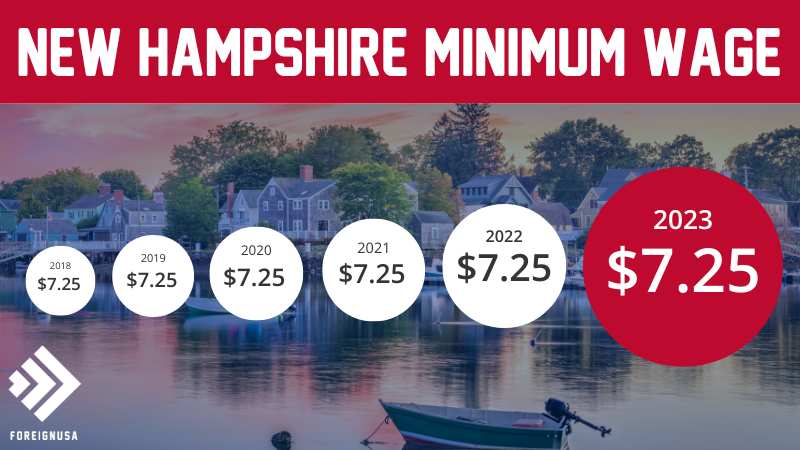 New Hampshire has not had a minimum wage increase since before 2008, it has been over 10 years since the state last witnessed an increase to the minimum wage, even though the cost of living is considered quite high.

Much like other states, there are some exceptions to the NH min wage due to the type of employer/industry:

The table below provides the history of New Hampshire’s minimum wage over the years since 1983. You can see when there were increases in the minimum wage, how much they were, and what percentage increase it represents.