The Alabama state animals are the Black Bear and the West Indian Manatee and were adopted by the state to best represent its historical roots and past and present successes. Many other state symbols represent Alabama, such as nicknames, state seals, trees, cakes, flowers, birds, and more.

What is the Alabama Land Mammal?

Alabama’s state animals are split into two groups, the state land mammal and the state marine mammal. The Alabama land mammal is the famous black bear and has been since 1996. These beautiful bears are known for their shy and intelligent nature, rarely being spotted in the wild due to their illusiveness and secretive behavior. Typically these bears are black; however, white, beige, brown, and slate gray colored black bears have been spotted in the wild. 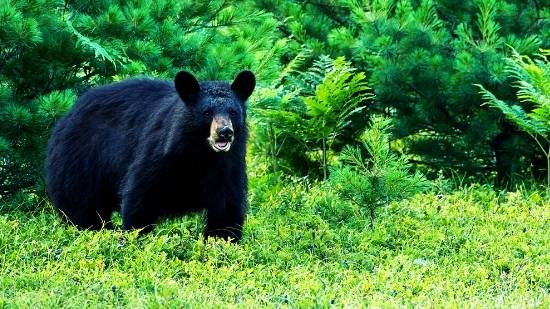 The adults range in size and weight, with the smallest being around 150 pounds and the largest growing to a colossal 500 pounds and even as big as 700 in some rare cases. Their diet consists of just about anything, but mainly nuts, berries, roots, insects, and even small mammals.

In North America, their population spreads a wide area from northern Canada and Alaska down to northern Mexico. Additionally, these bears are fantastic swimmers and surprisingly quick runners, reaching 30 mph and higher speeds. Fortunately, an estimated 600,000 black bears are currently residing in the wild.

Black bears have been around for around 2 million years, which is remarkable and proves their excellent adaptability. Due to this, they live in an abundance of different habitat types in the wild, typically, they are found in forest areas with thick ground cover and many fruits and vegetables to feed on. During the cold winter months, they hibernate in nests and dens that they create.

What is the Alabama Marine Mammal?

West Indian manatees (Trichechus manatus) are the marine mammal that represents the state of Alabama and has been since 2009. Unfortunately, these unique animals have been declining in numbers over the past few decades. In the wild, there are an estimated 13,000 manatees. However, fortunately, the U.S. Fish and Wildlife Service announced on March 30, 2017, that the numbers are beginning to increase again thanks to huge improvements made to their habitat and general living conditions, resulting in them no longer being on the endangered list. They are also a protected species by the Marine Mammal Protection Act.

These awesome but unique manatees have been representing Alabama for an incredibly long time, and since their discovery, many interesting facts have been discovered.

Most states will have their symbols showcase a relevant story that is indicative of the state and its history. The Yellowhammer State puts its history and what it stands for across very well with its state animals. This interesting fact about Alabama and a whole host of others is what makes the state so unique and fascinating to those that live there or are researching the historical events of the state.