State symbols are often adopted after a collaborative effort by citizens to have a significant item recognized for its importance to the state. States such as Texas, and many others began to adopt some of their own official state symbols several decades ago, and in some cases, over 100 years ago.

A state symbol can come in the form of state mammals, birds, flowers, insects, amphibians, nicknames, state seals, and much more.

Citizens, children, and educational institutions often research a particular symbol and make a request for a bill, tracking it all the way through the legislative process with the hope that it is enacted, and a new state symbol is announced for Texas.

Like all other states, there are many Texas state symbols. The Texas state bird and flower are the Mockingbird (Mimus polyglottos) and the Bluebonnet (Lupinus texensis).

What is the Texas State Bird?

The Texas Mockingbird was originally adopted as Texas’ official state bird in 1927, this was a result of the “Senate Concurrent Resolution No. 8, 40th Legislature”. The vocal abilities possessed by these mockingbirds ARE truly remarkable and undeniably a sight to behold, singing up to 200 different songs, which include the songs of other birds, insect and reptile noises, and even mechanical noises! Texas mockingbirds are found in abundance across the entire state, and nation, for that matter. The total population of mockingbirds is an estimated 45 million! This Mockingbird is also very popular in other states. It is the state bird for Arkansas, Florida, Tennessee, and Mississippi, in addition to Texas. After the adoption of this bird, the Texas legislature said that the mockingbird “is found in all parts of the State, in winter and in summer, in the city and in the country, on the prairie and in the woods and hills … is a singer of distinctive type, a fighter for the protection of his home, falling, if need be, in its defense, like any true Texan”.

Mockingbirds are beloved by many across the nation as they are intelligent, peaceful, and extremely skilled singers. Their long existence and interesting behavioral patterns have created an abundance of fun facts about them that you probably didn’t know about. Let’s dive in:

What is the Texas State Flower?

Texas designated the beautiful bluebonnet as the official state flower back in 1901. These flowers were named this way due to their blue coloration and sunbonnet-shaped petals. The somewhat ironic thing is that not all bluebonnets are actually blue. They come in many different colors such as purple, red, orange, and more. This is, however, a rare occurrence as the majority you will come across are typically blue. 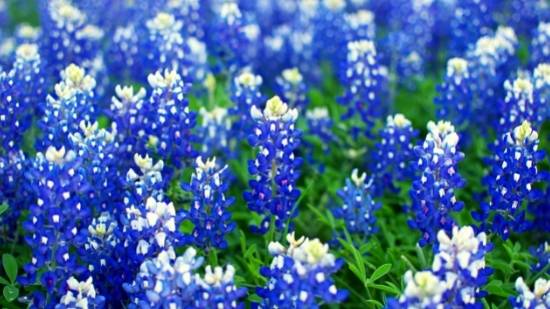 The North American prairie is the home of the bluebonnets, but unfortunately, it has been labeled as one of the most endangered ecosystems on the planet. They began forming over 20 million years ago, but there are some areas where up to 99% of the prairie has been destroyed in the last 100 to 150 years.

Most states will have their symbols showcase a relevant story, that is indicative of the state and its history, and the Lone Star State puts its history and what it stands for across very well in its state bird and flower.