What is the Missouri Server Minimum Wage?

The laws surrounding the Missouri minimum wage for servers act as a safety net for those that may not earn enough in tips to meet the minimum wage threshold in the state.

Servers are those who provide and serve their customers with food and beverages in a restaurant or similar type of food establishment where food and drinks are brought to the table, and as part of this service, a server will typically receive tips (gratuities) for doing so.

Missouri servers usually rely less on their low hourly wage and more on the generosity of the guests they serve for their paycheck each week.

As you can see from the following graphic, the minimum wage for servers in Missouri has increased steadily over the past several years. 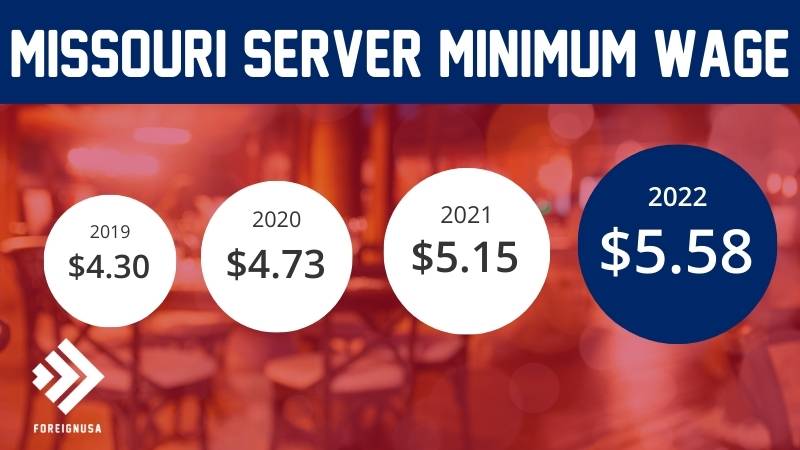 Based on the tipped minimum wage laws that apply to all states, Missouri employers are required to pay their employees an hourly minimum cash wage with the addition of tip credits. What tipped credits allow employers to do is pay tipped employees less than the minimum wage so long as they can make up the difference via tips per hour during each pay period.

In Missouri, servers must be paid a base minimum cash wage of $5.58 per hour. The expectation is that Missouri servers will make at least an additional $5.57 per hour in tips on average across their pay period, so they earn a cumulative $11.15 per hour, and if they do, then the employer is only obligated to pay a Missouri server $5.58 per hour.

Let’s assume that a server does not make at least $5.57 per hour in tips as an average over the course of their pay period (usually two weeks), then the employer must step in and pay the Missouri server a tip credit of $5.57 per hour, so the server makes a minimum of $11.15 per hour for the duration of the pay period they worked when you combine the tip credits with the server minimum wage of $5.58 per hour.

If you are a server or are looking to work as a server in a restaurant or similar service-related business in Missouri, knowing the hourly wage for servers is important, but knowing what you can expect to earn is perhaps even more important.

Some Missouri servers are probably not going to take a position at a restaurant with the view that they can only earn $11.15 per hour because, based on working 35-40 hours a week, they would earn $390.25-$446 per week.

What Do Servers Get Paid in Missouri

The above calculations are just averages to give you an idea of what you can earn as a Missouri server. The most important aspects of how much you can earn will depend on how good you are at your job, what type of food/beverage establishment you work at, and how busy the restaurant/cafe or bar is.

Also, many people that work at restaurants or similar establishments are willing to work more than 40 hours per week which may make them qualify for overtime pay.

If the average food item on the menu is $14-$20 and the restaurant mainly serves wings, burgers, subs, nachos, fries, and similar snack-style food, then the average check for each guest or table will not be that high, and therefore, the percentage tip against the total check will result in you earning a lower amount of tips per table you serve, and you’ll have to serve many tables during your shift.

Perhaps the most important takeaway from this is that, as a Missouri employer, it is your responsibility to pay your servers a minimum hourly rate + tip credit that equals or surpasses the Missouri minimum wage in the event that your servers do not earn enough to meet the $11.15 per hour threshold in a given workweek. Failing to do so will be breaking federal and state laws. Equally, it is important that as a server working in Missouri, you know your rights and how much you should be paid with your hourly wage and tip credits.

If you have specific questions about the laws surrounding the minimum wage for servers in Missouri (tipped employees) from both an employer and employee perspective, you can contact the Missouri Department of Labor. Additionally, if you are an employee who isn’t being paid what you legally should be, you can file a complaint with them too.